Is “quietly quitting” the gift that keeps giving?

Happy Lunar New Year of the Water Rabbit to you! My ego doesn’t mind telling you that I started the Gregorian year officially being “wrong”. My family wanted to go away, and I wanted to remain at home and have a “staycation”. We came to a compromise and, who would’ve thunk it? Turns out that a holiday, albeit hastily planned at the last minute, was JUST what we all needed.

It was a clear reflection on how set in my ways I can be, but also a stark reminder that what benefits you as an individual, doesn’t always work in a group setting.

Last year, there was a New York Times article that explained the notion of “quietly quitting”. Like most hypotheses in life, it wasn’t necessarily a new concept, but by giving it a name and an explanation, it extended a form of validation and street cred, and opened up a wider opportunity for it to be discussed and even accepted in mainstream communities and sub cultures.

For context, “quietly quitting” refers to doing the minimum requirements of one’s job and putting in no more time, effort, or enthusiasm than absolutely necessary. As such, it is something of a contradiction since the worker doesn’t actually leave their position and continues to collect a salary.

By introducing this theory into wider discourse, many suggested that this was the wake up that many employers needed. Some implied that this need to “quietly quit” stemmed from the burnout many of us faced post pandemic and lockdowns.

Others went on to expand that this theory was something that that they had either applied or were in the midst of applying to some personal friendships, and even to their marriages. In intimate relationships, it was used for a range of reasons, such as feeling physically unwell, needing a circuit breaker – but not necessarily wanting to break up, or during an impasse when both parties were sitting on the fence and humming to the tune of “should I stay or should I go?”

Timing plays a big role in relationships, as sometimes you’ll outgrow a friendship or a partner, or sometimes you’ll get to a certain emotional awareness or life passage before or after them. “Quietly quitting” gives you, or them, a chance to either catch up, or for an opportunity to decide that your paths are no longer aligned. 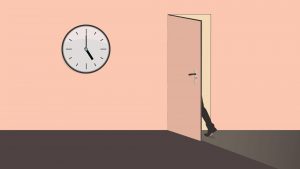 I guess a little unlike Prince Harry who quit rather noisily, while divulging sulky and inane details about his privileged life. While you couldn’t pay me to watch or read his memoir written by a ghost writer, as a therapist, I can see the unhealed trauma that must still be plaguing him. My friend Kylie Kapeleris suggested that most of us have done something similar to him, but instead, sought catharsis from writing in a journal, as opposed to an overpriced book that would likely discredit us forever.

But I digress. Some articles even went on to suggest that this concept was not just limited to employees, but extended to employers who use this passive-aggressive approach to avoid firing employees or incurring severance costs. Managers may also ‘quietly fire’ to avoid having tough conversations about poor performance or developing a support plan.

I called a cease fire into my deep dive into this idea, as it’s not so easy to quit quietly when you are self-employed like I am. But while I was away, I was inspired by the notion to “starting slowly”.

And so far, this has been the theme for this year. After 2 weeks away, I opted not to return to work with guns blazing like I usually do. I dipped my toe in the water with returning for 2 days a week, and then 3 days on the following week, and have since realised that this is another version of “quietly quitting”

I also have no new year resolutions (but the same themes from last year actually!), and just some loose ideas of how I want the first 3 months to unfold, along with several checklists on post it notes that will help keep me accountable for those different sectors of my life.

The gift that keeps giving, is that these plans can easily be transitioned into the 2nd quarter of the year if they don’t get “finished” by March. Unlike evergreen trees, we are not meant to create without a break, especially as the end of last year was quite full on for me.

In order to birth a new aspect of our self that we have outgrown, not only do we need the time to shed our skin, but also the right timing to emerge into the updated version of our own blueprint.

Until I see you again, I’m sending you lots of love,

P.S. Speaking of outgrowing an old aspect of ourselves, this month’s podcast is with a very inspiring man called Siavash (you’ll have to tune in, if you want to know how to pronounce his name). He moved to Australia from Iran and left his job as a human rights lawyer to work as a manager in the disability sector.

Thank you for giving a voice and sense of recognition to carers with your podcast. I’ve listened to every episode and think you should release them every 2 weeks instead of every month!! Teehee xx