Several years ago I walked into a school playground on my way to teach children’s yoga, when I was suddenly greeted by a bevy of excited little beings clamouring for my attention.

It’s the classic ‘rock star moment’ most teachers experience when their little students rush to welcome them with that unfiltered, undiluted, pure expression of joy and excitement.

The greeting alone is enough to brighten your whole day, for it’s full of unconditional love that is free of any societal conditioning – much like a puppy that greets you when you get home..

“Miss Patty, Miss Patty, can we do that thing again where we die at the end of the class?” they asked excitedly.

I was reluctant to agree, given how it almost went pear shaped the week before, but ultimately gave in when I realised that the boys were all away on a school camp.

I was hoping that the girls would be less likely to re-enact the violence of an AK47 gunning down the entire school like their male counterparts had demonstrated the week before.

I could still feel the sting of shame from having to march my asana to the deputy principal’s office to explain that the incident was a learning experience, all in the spirit of yoga and union..

Sure enough, after I lead them through the creative ‘yoga’ process of being ‘born’ and having many ‘adventures’ through their life, my creativity started to wane thankfully just as their energy levels started to fade.

It was ultimately time to ‘die’ (or in the adult yoga world, sleep during the final relaxation also known as the final posture, savasana.)

My dramatic cue of “And now, it’s time.. to DIE!” was equally rewarded with pretend gasps, feigned sighs of sorrow and even some melodramatic ‘fainting’ and hands to the heart a lá Scarlett O’Hara style from ‘Gone With The Wind.’

It was adorable and hysterical all at once, and was also the last time I remember musing about the ideal way to cross over once you leave your body.

That is until a few weeks ago when my beloved dog Rufus died in my arms.

I’ve toyed with the idea of writing a post about something so personal, but given how much of an impact RuRu had on anyone that crossed my professional (and personal) path, penning a loving ode in his memory just seems fitting.

And given how much of a transformation he had on my own psyche and my ability to love unconditionally with such an open heart, I can’t help but reflect on how much deeper my capacity to hold the space as a teacher and therapist accumulated because of him.

He bounded into my life just as I had burned the main channel in mine with a second adrenal burnout, and he taught me about the invaluable importance of quality rest.

He’s the reason why I can go to bed early or nap at any time of the day without any shred of guilt, or feeling like I’m missing out on life. The self constructed misunderstanding of how ‘busy’ I am or how ‘important’ a task is no longer shows up in my life as frequently as it used to.

His over extended solar plexus chakra somehow bought my deficient solar plexus into balance for he was as unapologetic about his disdain for certain people as he was adamant that he needed to be fed again.

It didn’t matter that RuRu weighed 6.5 kgs or that it was important (for me) that he was nice to my dad, a client, a landlord or even a policewoman one time. That little ball of white tenacious fluff could stand his ground in any given situation.

Rufus didn’t care that the neighbour’s staffy and my friend’s German Shepard were 3 and 4 times his size. Nor did he get stuck on little details like the fact that he was in fact de sexed and with no testicles. Nope. There was just no stopping him when he wanted to dry hump and dominate those gorgeous bitches.

I figured if RuRu could rule the streets of Bronte as a one man show then surely there was no stopping me in launching my own business empires doing what I loved.

In fact, not only did my business grow, it ended up expanding in a way that could easily accommodate for his care when he got older and fell ill.

We started our journey together with him as my sidekick when I taught public yoga classes. He had practically been born in a yoga studio and was comfortable falling asleep under the gong while I played it.

He’d patrol the studio waiting to greet his (few) favourite people and would always fall asleep in his bed during class. I’m sure Rufus was convinced that the final chants of ‘Om’ were the students’ way of waking him up so he could salute them before they returned to their lives off the mat.

Until I met him, I’d always fancied myself a cat person more than a puppy lover.

Little did I know that a half Shi Tzu, half Maltese terrier with a distinct blue tongue and piercing jet black eyes that could penetrate my soul like he did. Nor had I ever witnessed a will of iron that could easily cajole me (and most people) into giving him the last piece of whatever we were eating.

The artist formerly known as the ‘Yoga Dog soon morphed into version 2.0 of himself and was recognised as ‘The President of The Starving Union’. He embodied the archetype of a highly intolerant  *cough* grumpy old man who wore trendy cardigans and held exclusive dinner parties – that not even I could always guarantee an invite to.

He taught me the lesson of honouring my truth and not committing to a routine that simply goes through the motions. 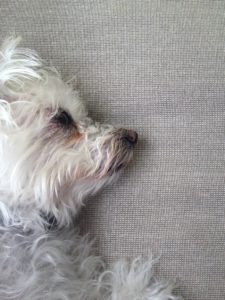 Chasing balls and sticks was never an interesting past time for him. If anything he’d look down at other hounds in the park that would engage in what he considered to be such demeaning behaviour.

To this day, it’s why I’m so deeply committed to the idea of ‘alignment before action.’ What may have been right for me yesterday, may not necessarily resonate at the same frequency today, and this inspires me to stay connected to what I need to do, in order to stay in my flow.

He taught me to stay present in the moment and to honour my body with the movement that is appropriate for that day.

Despite being incredibly loved and adored, his last few years meant that a myriad of illnesses finally took their toll. 2 big operations later and regular medication eventually lead to the more natural cbd oil in order to keep him comfortable in his final months.

Unfortunately, it also meant that we could no longer go for long walks to the beach and visit all his fans along the way, so his final ‘job’ for the previous 2 years, has been as the President of The Welcoming Committee for all my clients.

One of my last memories of him was desperately trying to get my bride and groom’s attention during their wedding rehearsal while RuRu flitted between them for cuddles and licks.

Grieving my best friend and favourite little being has meant that I have had to honour the heaviness in my heart in order to process the absence of his passing. I miss him so much and even though I know his little body is free from pain, I’m comforted when I feel his enormous spirit running around my home. If I’m quiet enough, I can even hear that squeaky toy that used to drive me mad.

As you may know, I haven’t had children yet, and I’m not sure that doing so is even my calling in this life, so for many years, RuRu represented the archetype of my precious fur baby.

In saying this, I also want to acknowledge how sensitive I feel to those who have lost parents, children, siblings, partners and friends. My own dad is quite ill and I don’t know how long he’ll stay on this earth, although my mum is convinced he’ll out live us all just to spite her.

As a healer, I’ve also had to practice what I preach in terms of chakra balance and energy clearing, hence why I took some time off and also postponed my retreat (til 17 -19 August), for it co incited with his final week here on earth.

This year has not been about goals, and forecasting and growth. Well, at least not so far, anyway. It’s been more about stillness and courses that have offered deeper learnings that have already influenced my professional offerings.

I’ve also immersed myself in teachings about Ancestral Healing, but given how long this post is shaping up to be, maybe I’ll write more about it next time..

I’ve been very blessed with a deep connection to my wonderful clients through my Soul Alignment program and I’ll be teaching my first workshop for the year for the Autumn Equinox at Sukha Mukha Yoga in just 3 weeks.

I’m not sure I’ll get a chance to write to you again before then, so if this workshop does interest you, please do book in, as spaces there tend to fill quite quickly and I’d hate to miss out on seeing you during such an auspicious time.

Until then, I’m sending you so much love x