I have a great dad. As much as we see the world in almost opposite ways, I am often in awe of the way in which he’s managed to survive and be a great fatherfigure.

A European immigrant that did not have the opportunity to be educated in his own respective country and sadly did not take it upon himself to seize educational opportunities in his adopted country, he along with Mama Bear and Brother Bear have been some of my greatest teachers in this world.

I write this after having spent a day with him celebrating the commercial Fathers Day, which gave us the opportunity to be together as a family. We made the most of the sunshine in the backyard and ate, talked, ate, cuddled, ate and laughed for the majority of the day.

I’m motivated to write a post because the number of yoga students as well as reiki and kinesiology clients who have shared horrific stories that involve their dads humbles me.

Despite abuse and abandonment issues, many of my clients and some of my closest friends still manage to find the ability to heal and move on, determined to be defined by who they want to be, as opposed to what happened to them in the past.

I’m humbled at the innate human ability to be able to demonstrate love with actions and words despite the pain that marked a significant amount of our past. One of my friends is co parenting his little girl with his friend who was never his partner, but who fell pregnant after a lustful night. Another friend is battling with the pain of discovering that he may never be able to father his own children naturally while another buddy of mine is contemplating whether or not to stay in his current relationship after his partner made it clear she does not want children.

I also wanted to share a couple of things that have gone viral on the Internet in relation to dad’s being great dad’s. The first is a letter from a dad to his son that outlines his unconditional love and acceptance of his son’s homosexuality by American blogger John Kinnear was outraged when another blogger posted a letter on Reddit, outlining how he was disowned by his father when he told him he was gay.

John responded by writing a letter to his son – that hasn’t actually been born yet.. It made my heart sing and soar – and you can find his blog here

You’re gay. Obviously you already know that, because you told us at the dinner table last night…

OK. Let’s get a few things straight about how things are going to be.

1. Our home is a place of safety and love. The world has dealt you a difficult card. While LGBT people are becoming more accepted, it is still a difficult path to walk. You’re going to experience hate and anger and misunderstandings about who you are out in the world. That will not happen here.  You need to know with every fiber of who you are that when you walk in the front door of your home you are safe and you are loved. Your mother is in complete agreement with me on this.

2. I am still, as always, your biggest defender.  Just because you’re gay doesn’t mean you’re any less capable of taking care of/defending yourself. That said, if you need me to stand next to you, in front of you, write letters, sign petitions, advocate, or anything else, I am here. I will go to war for you.

3. If you’re going to have boys over, you now need to leave your bedroom door open. Sorry kiddo. Thems are the breaks. I couldn’t have girls in my room with the door shut, you don’t get to have boys.

4. You and I are going to revisit that talk we had about safe sex. I know it’s going to be awkward for both of us, but it is important. I need to do some research first, so let’s give it a few weeks. If you have questions or concerns before then, let me know.

That’s enough for now.  Feel free to view this letter as a contract. If I ever fail to meet any of the commitments made herein, pull it out and hold me to account.  I’ll end with this: You are not broken. You are whole, and beautiful. You are capable and compassionate. You and your sister are the best things I have ever done with my life, and I couldn’t be more proud of the people you’ve become.

P.S. Thanks to a few key Supreme Court decisions and the Marriage Equality act of 2020 you’re legally able to get married. When I was your age, that was just an idea. Pretty cool huh? 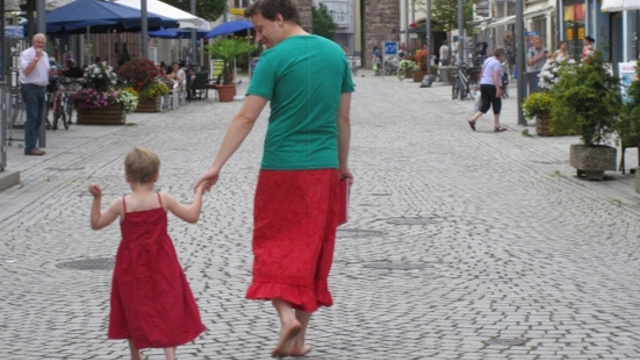 The second is an open minded German dad  called Nils Pickert who has started wearing a skirt to help his son feel comfortable with his own wardrobe choices.

His son likes wearing dresses, a lifestyle choice that rose more than a few eyebrows after the family moved from West Berlin to a small, conservative town. After Nils found out his son was feeling uncomfortable wearing his favourite dresses to his new pre-school, he took matters into his own hands, deciding to lead by example and show his son that you can take charge of a situation without wearing the pants. When interviewed, he was quoted as saying, “I didn’t want to talk my son into not wearing dresses and skirts. I had only one option left: to broaden my shoulders for my little buddy and dress in a skirt myself”.

And a big shout out to MY dad. For those times you brushed the knots out of my hair, participated in my tea parties, stored endless pieces of my crap in your garage, drove me to school / parties / work, taught me to drive, bought my first car, supported my decisions when you thought they were crazy, picking me up when I got stranded, helping me move a gazillion times, & offering to come visit me in Bronte just so we can have a cup of tea together. I love you xx