April, Sydney – 2015 – we were impacted by the worst storm in 10 years. I hope you haven’t been severely impacted by the Sydney storm. Some of my friends lost power in their homes, and others had trees fall in their backyard.

I was lucky enough to stay dry unless I absolutely had to venture out, in which case I was entertained by the novelty of wearing my gum boots, and sharing pics on Instagram of the new term coined for lost umbrellas – #umbrellageddon 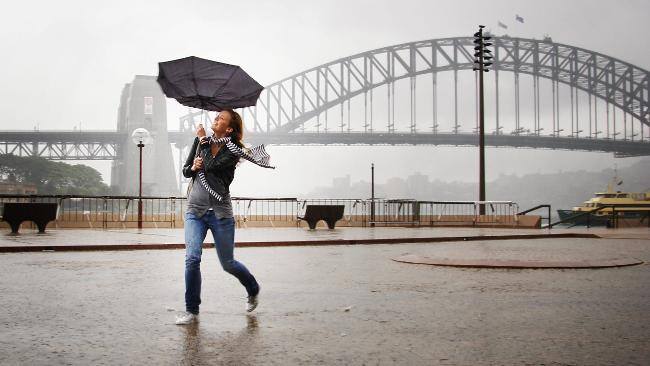 When I ducked into my local coffee shop, the manager lamented on how much she hated the rain because it made her sad and glum. Do you ever feel like that?

I used to think that rainy weather depressed me, especially when I first moved to London many years ago. I never felt particularly happy and I initially thought it was because of the cold and the rain.

It’s just that when I decided to move to Amsterdam, it turned out to be a city that was even colder than London and it just so happened to rain. Every. Single. Day.

It was also a time in my life where I was at my most happiest. I learned to ride a bike and hold an umbrella at the same time, and the rain never really bothered me. I just accepted it and got on with my life.

And I learned that happiness is an inside job, and while the weather can certainly impact it, ultimately, I was responsible for my own values, belief systems, and my behaviour.

When I was suffering from migraines last year, I went to see a neurologist who specializes in this field, and after outlining my symptoms to him, his response to my ‘sudden migraine’ has really stayed with me. “Patty, you don’t just wake up or ‘get’ a migraine. It’s been coming for a long time; you’ve just been ignoring your body’s warnings signs.”

It’s the same with the wet weather. You don’t just ‘get sad’, there’s some sadness in there that’s been waiting to come out for a while. Befriend it. Respect it – it has much to teach you.

There’s a natural ebb and flow that occurs in the world – we’re not always meant to flow, or be ‘on’, or produce content. Sometimes our soul needs to ebb and find some new inspiration. To recalibrate and rebalance. Sometimes we just need to feel the natural flow of sadness, and honour that dark, shadow-y part of us.