Another Circle Around The Sun & Moon

Today we honour international womens’ day which co incides with the day my mum evicted me from her uterus. To be fair, my impatience was evidenced from my birth when I decided to come 2 weeks early.

I must have figured that I’d be too intense as an Aries, although I’m somewhat remorseful about the lack of grunt in my personality now. I mean I know I make it look easy, but being so bloody sensitive can be a tough gig at times.

Not that there’s much I can do about it now. It’s not like I can go back, right?

In my bid to ensure my life remains exciting, I tackled a ton of admin tasks that included, but were not limited to getting my driver’s license and passports renewed well after they expired.

I know, I know, I’m really living on the edge.

Something that had previously entered my field of Instagram consciousness then converted to real life at the Greek Consulate with the current trending topic of the #tenyearchallenge.

You know the new trend where you place 2 photos up against each other as one represents your current expression while the other represents what you looked like 10 years ago. I decided to go one better and present an additional 20 year challenge.

The 2 pictures on the right are ten years apart. Even back in 2009 you can see I had nailed the look of a nonchalant drug mule. But check out those babies on the left. The far left look that is reminiscent of a deer in the headlights was my last year at university, while the one in the middle was my ID card when I lived in Europe. 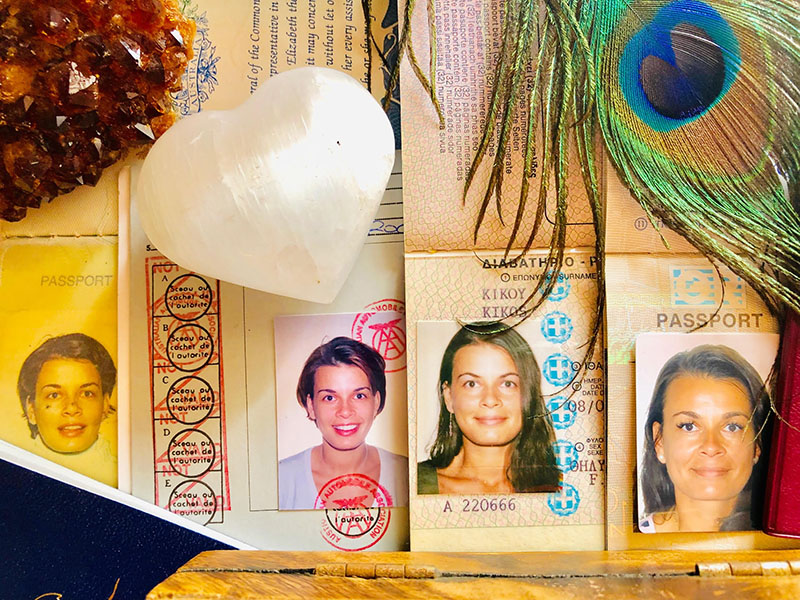 Ah.. how I miss collagen in my face and being legally allowed to smile for photos. Those were the good old days, weren’t they? On the flip side, how advanced are the flashes in cameras these days? They cleverly disguise those laugh lines we are told are wrinkles

In this day and age, I believe that women still get the shorter end of the stick as so much advertising is geared towards us needing to look ‘younger’. The woman who has children and looks after them runs the risk of gradually becoming invisible while her male counterpart is considered to be in his prime.

It’s such a privilege to ‘age’ in a first world country where being in your 40’s is no longer considered ‘old’ with the same negative stigma that it used to be associated with.

In the words of Tosha Silver, ‘Let us embrace what the Universe sends us as if it has come from our own heart’. After all, anything we can’t control is teaching us how to let go.

And today I leave you with a beautiful thought that came from one of Carolyn Myss’ lectures. It’s her take on the concept of praying and I share it here with you today.

‘What happens when you pray? What is prayer? When I think of prayer, I think of the experience of transmitting light to a divine force and having light returned.

When that light is returned, it’s ALWAYS returned with grace and guidance.. but what is our capacity to interpret that grace into information, that is, into guidance?

The more we unplug ourselves from the illusions of the mind, the more we can interpret the grace we receive, with absolute clarity, and the more grace can take on a direct voice.’

Happy International Womens day beloved – may your day be full of love, grace and magic. Til next time, Patty